Omokri questions why Obi Cubana was invited by EFCC, but Abba Kyari was not

A former presidential aide to ex-president Goodluck Jonathan, Reno Omoki, on Wednesday, berated the Federal Government of being over the investigations by the Economic and Financial Crimes Commission (EFCc) in the financial affairs of renowned socialite, Obi Cubana.

It was reported that the EFCC on Monday invited the businessman to its head office to answer questions on sundry issues, which the agency merely classified as tax fraud and money laundering but declined to give specifics.

However, in a series of tweets, Omokri accused the government of “double standards”, reminding people that ‘even with damning evidence, top police officer, Abba Kyari wasn’t invited by the EFCC’.

“Even with the damning evidence the FBI provided against Abba Kyari, he has not been invited to the EFCC, nor is he under arrest. So, again, why is Obi with EFCC and not Tinubu or Kyari? Is it because Obi is Igbo and they are not? This is obviously double standards!

“I would counsel Cubana to join and donate to APC, like FFK, and not only would his ’sins’ (if any) be forgiven, he can even take a photo with Buhari at Aso Rock. A government and party of double standards. Hailing Tinubu and jailing Obi. Yeye baff una!” 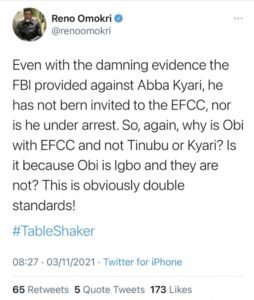