Laila who is the fifth wife of the businessman announced the end of their marriage on the social media platform, Instagram.

Speaking on her Instastories, Laila stated that everyone who followed her social media account because of Ned Nwoko should unfollow her. She also threatened to block trolls who might want to leave negative comments on her page.

“Hello, guys I want to say that no one has the right to talk about my marriage, please. Stop talking about people’s lives and I have divorced and already and nothing between him and me,” she wrote during the early hours of Tuesday, November 2.

“And anybody follow me because of him, you can unfollow me please.” 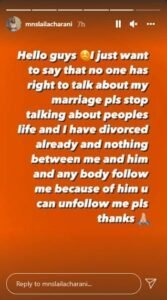