Big Brother Naija star, Cross has taken to his Twitter page to brag about his family’s achievements three months after leaving the reality TV show.

The reality star claims that one of his brothers is about to become a deputy governor of a state. 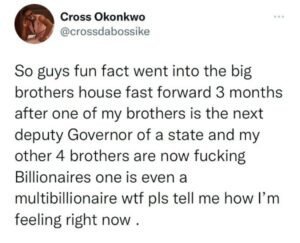 Cross recently made headlines for all the wrong reasons after he published a lewd video of himself on Snapchat.