Nollywood actress, Ifunanya Igwe in an Instagram post published on Monday, October 18 stated that men are not prepared to condone what they often dish out.

According to the actress, recent controversies in relationships has revealed that men cannot handle women cheating on them; stating further that yet men go ahead to cheat on their spouses “over and over again without remorse”

She also called out those judging people despite having skeletons in their closets.

In the latter part of her post, she went on to ask people to leave the popular dancer and social media influencer, Janemena and her husband alone.

Read her thread below. 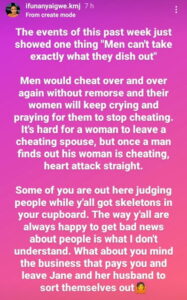 Igwe’s post is coming several days after social media influencer and dancer, Janemena was alleged to have cheated on her husband with actress Tonto Dikeh’s former partner and politician, Prince Kpokpogri