Mr Kwankwaso says he wishes Shettima well on his nomination.

by Babajide Alao
in Politics
0

The presidential candidate of the New Nigeria Peoples Party (NNPP), Rabiu Kwankwaso, on Sunday, has spoken on the choice of Kashim Shettima as running mate of Bola Tinubu, the candidate of the ruling All Progressives Congress (APC).

Mr Kwankwaso gave his opinion on the development in an interview with Arise Television on Sunday.

Mr Tinubu’s appointment of a fellow Muslim as his running mate has caused varied reactions.

However, Mr Kwankwaso saw nothing odd in the nomination, saying he is “happy with the combination.”

He described Mr Tinubu as a strategist and good person whom he has known for a long time.

“I am happy with the combination (Muslim-Muslim ticket). My only worry is the platform. Bola Tinubu is a strategist and a good man. I have sat down with him countless times from 1992 to date,” Mr Kwankwaso said. 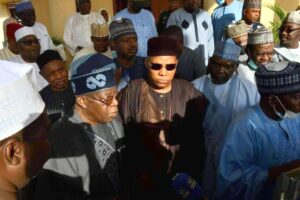 I wish I could see him to ask him what he will do differently from what President Muhammadu Buhari has been doing. That is my concern for him.”

On the running mate, Mr Kwankwaso said: “Shettima was my colleague as a governor during my second term. He’s a gentleman, he’s a good man. I wish him well.”

Mr Kwankwaso is one of the three top opponents of Mr Tinubu, alongside former vice President Atiku Abubakar of the Peoples Democratic Party (PDP) and Peter Obi of the Labour Party.